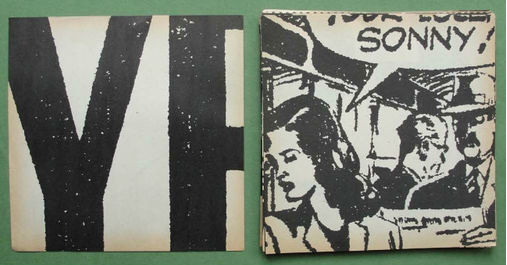 In week 4 we have been introduced to photobooks. Photobooks use mainly images and sometimes text to convey a message across the book. We discussed the importance of the editor of a newspaper and the way they shape the publication as much as an author. The way images are chosen, presented, edited and the sequence they appear in all have an effect on the overall narrative or message. The images can carry the stories.

Some artists have created photobooks based on news stories. One example is Dieter Roth, who is known for making miniature books. In 1961 he made The Daily Mirror Book, using snippets from The Daily Mirror newspaper. In this way, the artist is maybe consciously or subconsciously interpreting the news and showing us the parts he is most drawn to.

By using one small area of a photo or a piece of text, we are more aware of how the image looks visually. The meaning becomes ambiguous, and this leads the viewer to guess what they are looking at. Is this snippet from a story about something positive or negative for example. By showing half of a sentence, our minds try to fill in the gaps of the area we are not seeing. The artists choice of images shows us something about his personality. For example, some of the images are quirky and humorous when taken out of context.

In a way, he is reconstructing the book by forming a new book made from the old book. He is giving the newspaper a new life and making it more meaningful to people. A newspaper is an object that is thrown away after use (a transient object) By constructing The Daily Mirror Book, he is creating an object that has value. If someone handed me a newspaper, I may or may not read it but it would soon go into the bin. If someone handed me a tiny book they had spent time and effort into creating, I would likely keep it.(it has become a durable object)

To make a Dadaist Poem is a set of instructions written by Tristan Tzara in 1920. Dadaists and other artists and writers, such as William Burroughs of the Beat Generation in the 1960s, would use similar techniques when coming up with inspiration for their work. To make a Dadaist Poem encourages spontaneity in the creative process.

By juxtaposing ideas, the artist is making something new. The unpredictability of these methods means the artist is open to inspiration and the outcome is interesting and unusual.

The poet Tristan Tzara was a strong advocate of the international Dada movement, but his Dada Manifesto of 1918 appears to be complete nonsense. It is, in fact, just that — but in a really interesting way that perfectly serves the goals of the Dada movement

Tzara, gave the following instructions on how “To make a Dadaist Poem” (1920):

Take a newspaper.
Take some scissors.
Choose from this paper an article the length you want to make your poem.
Cut out the article.
Next carefully cut out each of the words that make up this article and put them all in a bag.
Shake gently.
Next take out each cutting one after the other.
Copy conscientiously in the order in which they left the bag.
The poem will resemble you.
And there you are—an infinitely original author of charming sensibility, even though unappreciated by the vulgar herd.

William Burroughs would use cut up techniques for writing ideas. Several of his books were written this way. He used a similar method where he would take a page of text, draw lines on it. He would cut up and invert the sections. This would produce interesting narratives. He was also a visual artist as well as poet and novelist. He put together scrapbooks and painted.

Inspired by Madeira, his birthplace, Ramos created the Black scabbard research centre. This photo book is made up of pictures from friends and pictures from the newspaper, all within Madeira. In this way, he is painting a picture of the region, made up of the many stories within it. I like that even though some pictures may not look like they have any connection to the picture on the next page, they are linked by their association with the place. Every picture seems out of context. Words are not needing because of the strength of the images.

In this photo book, he is juxtaposing 2 separate images – from 2 far apart moments. By placing the images together, the viewer makes up a narrative that could be possible between the 2 or 4 images.