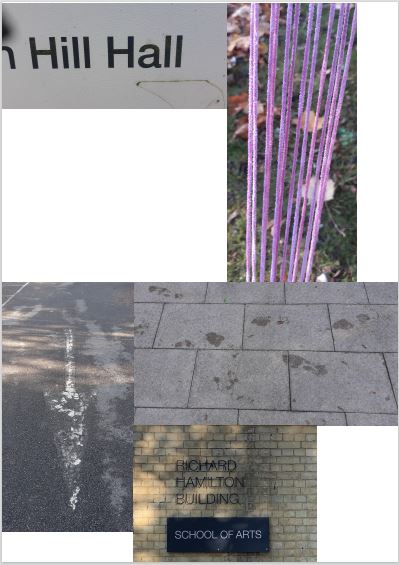 Maps and diagrams are not pictures but are appreciated aesthetically. Maps and diagrams ‘make’ sense. Making sense means producing sensibility. They are devices that enable us to act. We can map dreams, ideas, and thoughts. Maps are closed systems. They are representative. Maps write a place onto our consciousness. We cannot conceive of the ‘world’ without the use of maps.

This work is about someone’s understanding of the country they live in. Kim Dingle asked American participants to draw USA from memory. The drawings were on tracing paper so the artist could trace them onto a panel and paint them with oil paints.

I really liked this work. I felt inspired to approach today’s group project in a similar way where each person’s perspective is represented in the mapping process.

Adam suggested plotting a journey from memory and overlaying it with the real map.

Maps of Canada drawn from memory by American citizens
Oil on Canvas, 1990

These maps of Canada are less accurate than the maps of USA because the students were drawing another country.

The way somewhere is mapped makes you see a place differently.

Memoires is a book published in 1959. It was made in collaboration between 2 Situationist artists: Guy Debord and Asger Jorn. The book cover was made with sandpaper, so that when it is placed on a shelf, it destroys the books on either side.

I like the position of elements within the pages, for example the rotation of the text and images. This gives the work energy, helped by the splashes of colour. In this page, we see sections of maps and images of places. I like the combinations of these perspectives. They add to a sense of place.

Susan Hiller was an American conceptual artist. I was drawn to 2 of her artworks in particular. Monument is an art installation containing 41 photos of memorial plaques that the artist came across in one location in London. The memorials are for civilians who died from acts of heroism. The fact that she has enlarged the images could say that she is drawing focus to the importance of these people so they are not forgotten.

Hiller has arranged the photos into an diamond formation and placed a park bench in front of them where the viewer listens to a soundtrack of the artist speaking about heroism and death. I see the diamond shape as a cross which symbolises death in itself.

“Dedicated to the Unknown Artists 1972–6 consists of fourteen panels containing over three hundred original postcards depicting waves crashing onto shores around Britain. A large map annotated with each of the locations featured in the postcards is included in the first panel. The remaining panels have been subjected to what the artist has described as her ‘methodical-methodological approach’ (quoted in ‘Second Sight’ 2007, accessed 14 June 2018) and are organised into grids of postcards and tabulated details such as location, caption, legend, in vertical or horizontal format.”

“The proposed scheme is centred around creating new and exciting routes for people to travel along, whether it be through walking or cycling. The introduction of a bridge means this flow of movement is more continuous and links in with the Robin Hood Chase; which is the most commonly travelled route in St Anns. The buildings themselves offer bicycles that can be rented and used for travelling into the city, as well as workshop spaces where local people can drop in and learn how to repair common issues such as puntures.”

“Guillermo Kuitca is a contemporary Argentine artist best known for his paintings of geographical maps and architectural plans. Although Kuitca’s works are not overtly political, their theatrical nature seems to reference themes of loss and migration.”

Drawing with the camera. It is possible to utilise the camera in an interesting way to draw maps. David Hockney uses the camera is a tool, a medium. The accidental grid form is uncannily diagrammatic.

We were given until 3pm to produce a map, as a group of 4. Faced with the question: ‘How could you produce a map?’ Each of us was given a different medium that could be interchanged depending on our preference. The categories were: Line drawing, colour, words, photography.

Walking around campus, we had the task of mapping the area. This could mean capturing the details (the small) or the big areas you would find on a traditional map. Playing with scale. I really like this idea of focusing on the details and showing their importance in our surroundings/ environment. We were asked to think big and to think weird. We did this by drawing onto an A2 piece of paper and approaching the map with looseness. Our lecturer Adam made a grid template on illustrator that we had the choice of using or rejecting.

We had the option of merging the medium, for example:  words with photography or colour and photography. Our first ideas were to make line drawings of campus from memory. We thought of layering these with the actual map of the campus. Photographing words and colours were a way of capturing the smaller details around us. We thought about combining the words and colours together and pairing them up like with the museum of the ordinary framing task in module 003.

We each drew our interpretations of the campus from memory. We used a different colour marker for each group member. This meant that the viewer could differentiate the separate maps and follow one of their choice. The basis of this idea came from the United Shapes of America project by Kim Dingle, where people were asked to draw a map outline of their country from memory. People’s interpretations were all different but my map made sense to me because it came from my own perspective.

I photographed the drawings and printed the page at A3 size. This meant that there was space around the image to paste the photographs. We decided on having a few larger images and most of them smaller. The larger images stood out and would be more helpful to a viewer, as a map because the photos were of larger areas and paths around campus, compared to the smaller details that would not help you find your way.

Placing the images around the outside of the line drawings, served as a visual representation of each area of the campus. The use of arrows suggests to the viewer where they can find the photographed locations on campus.

I think maybe we tried to do too much in one place. My understanding of the task was that we needed to include all the mediums in one map. I think this is why the map looked busy.

Our feedback from Adam was that he would have preferred us to use a digital approach. He also wanted us to be bolder in our design decisions. The example he gave was Stephen Willats work, where he presents photographs with connecting lines to represent relationships between the images. His work is readable as a map and yet it looks nothing like a traditional map.

After the workshop, I placed a selection of the photos I had taken into an illustrator document. I re-arranged them into an images that ‘made sense’. Both images explain the journey from Headington Hill Hall on campus, to the Richard Hamilton Building.

This map starts with the starting destination at the top of the page. The instruction is then to turn left then stop. The bikes show where you will arrive.

The text at the top tells the viewer where to start. The lines leads the viewer down the page while also illustrating the next object you would need to find on the journey to know you are heading in the right direction.

The third image shows wet footsteps on the floor. They ‘walk’ to the left and the fourth image. This is a photo I took of a faded arrow painted onto the car park tarmac. The final photo was taken by my classmate and shows the destination to reach using this map.

We were introduced to the brief for the rest of the semester.