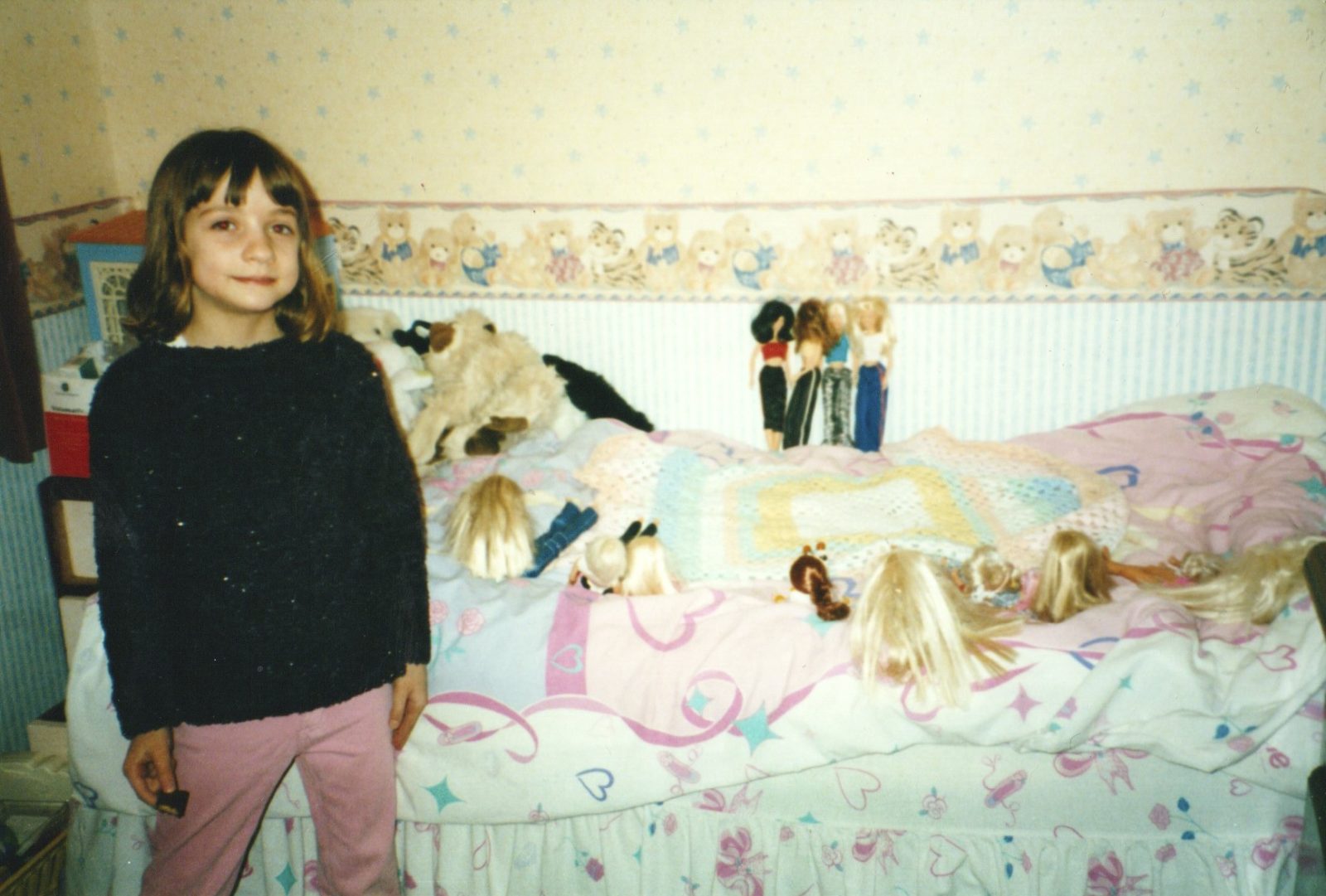 In the final week of the semester, I had the slides prepared to deliver on Thursday. I used InDesign for the slides and exported it to PDF for the presentation. I included links to 2 videos within the slides, therefore needed to select ‘include hyperlinks’ when exporting the document.

I needed to ensure the presentation had a narrative arc that makes sense. I did this by opening with the mention of Barbie being controversial and their influence on me as a child, moving on to explaining other controversial elements of the dolls, then ending with the same mention of the issue with Barbie and the effect on children.

This is me when I was 6, as you can see I loved Barbie dolls and anything with Barbie on it.

Barbies have always been controversial, This has mainly been because of their unrealistic body shape that has a negative influence on young girls especially. The body shape actually changed in the early 00’s. From this to this.

To demonstrate how Barbie was at the time and some of the issues I have, I want to show you this advert for Sleeping Beauty Barbie, from 1999.

I have an issue with how gender is portrayed in this advert. I feel like the advert re-enforces negative gender stereotypes where we see barbie as the helpless princess and Ken is the strong rescuer. And this can normalise unhealthy relationship dynamics, especially to this younger audience.

Another issue that  can be seen in the advert, is , as you heard at the end of the advert, the ken is sold separately. So when the child sees the advert, and sees that ken is an important part of the story, that both characters are sort of, needed, they’re gonna ask their parents for both. But because they are sold separately, this strategy gets people to pay twice the price, which can be an issue for working class families who struggle to, especially at Christmas, to afford these presents that these children are asking them for.

I also saw this class issue in the advert, with the actors. We have this blonde girl who’s at the front of the frame and she gets to hold Barbie, and her attitude is calm and entitled. Then we have the Asian girl who seems impressed and amazed at the doll and she never gets to hold Barbie herself, and Barbie is the one everyone wants to be. There’s a bit of inequality there and this girl physically resembles Barbie with her blonde hair.

What we didn’t see in the advert was the black sleeping beauty barbie, who was also sold at the time.

And if you look at both the dolls together, they’re the same in every way, as in they have the same dress, the same type of hair, the same body shape and the same mold was used for the head , meaning that their facial features are identical and the only difference is the colour and so this doesn’t represent much diversity and means the company is still angled towards the Eurocentric beauty standards. Mattel is the company who makes Barbies and they designed her in the 1950’s, based on a German doll, which explains why the blonde hair and the blue eyes became Barbie’s classic look.

You might say ‘that was the 1990’s, that was a different time.’ But I was shocked to find this blog post from 2010, where the blogger was in the shop target in America, she walked down the toy aisle and  she took many photos, showing the same thing. What can you see in these pictures?

And finally, this video shows a psychological experiment that has been repeated several times in history. It addresses the issue of racial prejudice in children

You might say ‘It’s just a doll’, ’it’s just a plastic toy.’ but to a child these are representations of women and in a girl’s eyes, who they are expected to be as a woman. For a boy, how they can expect women to look.  Barbie’s are modelled on perfection. Something that is unachievable. This doesn’t need to be the case. Mattel have addressed this and are now producing wider representation in their designs. This is a good start.

To give an example, in 1999, the same year as the advert, I remember being at school and being asked what I want to be when I grow up. Me and my friend both said ‘super lady’ since that covers all bases. We drew the same picture: a blonde woman wearing a pink suit.

The 2 videos I included, to support the presentation:

I was able to buy vintage Barbie dolls fairly cheaply on eBay. I bought 2 of each body shape (newer and older) to demonstrate the change of shape to the audience. I plan to pass the dolls around in the room. Being able to see them physically adds an interactive element to the presentation. Buying dolls from when I was a child also tied in how I relate to the topic and made the presentation more personal. I find speakers who can speak from experience, more interesting to listen to. This is why I chose to include the photo in the opening slide.

I typed out the script into shorter notes so I could easily read them as bullet-points when presenting. I glued these onto pink card to go with the theme of Barbies.

For the slides, I included the Barbie font, downloaded from the internet, named simply ‘Barbie’. I also downloaded the ‘sparkle’ vector to add to the theme:

I included the Barbie colours in my slides also. I did this by placing the colour scheme into InDesign, then making colour swatches from the image:

On top of using pink in the slides, I added a gradient to the pink, as this was the style in the 1990’s, and looks out-dated now.

(To add to the pink theme, I wore a pink Barbie-esque jumpsuit when presenting.)

My presentation has 4 main parts to it. I chose to stick the notes onto 4 cards, so that the points are grouped into their section of narrative.

I needed to cut down the amount of slides I included in the presentation, as I needed to make sure I stayed around the 7 minute mark. I dropped the slide about the song Barbie Girl by Aqua:

I also chose to remove the mention of the video game that accompanied the sale of the sleeping beauty Barbie doll:

I only needed 1 slide when talking about gender. I therefore removed the slide with this photo:

I already included 2 photos from this blog post. I therefore removed the third photo: